The New Kid on the Block

Yesterday a new Russian stallion arrived in Germany: Paparazzi (Piligrim / Pobeditelnica) * 2008, a chestnut stallion, born in the Russian stud Tersk. His sire Piligrim was a popular sire in Tersk who left almost 80 offspring. Paparazzi’s paternal half-brother Napevnij is currently the stud’s chief sire. On the maternal side, Paparazzi tails back to the Crabbet mare Star of the Hills, which was imported from England to Russia in the 1930s.

As a young stallion, the chestnut was presented at two shows in Russia and won a silver champion title, then he was experimentally used in breeding and consequently sold at the 2014 auction. Finally he came to Croatia, where he completed two 40 km endurance rides in 2016 and from where Rafael Yaari has now leased him for a breeding season. “Paparazzi fulfills three important criteria for me,” explains the lessee. “Firstly, he is beautiful on the outside, the way how – for me – an Arab should be, with breed type, temperament and harmony. Secondly, he is an all-rounder, as is typical for the ‘Classic Russian Arabians’, he was shown under saddle as well as at shows and he is human-related. And thirdly, he belongs to the Aswan stallion line, which has almost died out here and is only represented by Avanpost and GF Mashuk. “

After no less than eight mares were imported from the Russian stud Tersk to Germany last year – almost all of them with foals – the Russians are currently experiencing a small renaissance in this country. This is not least due to the fact that high-quality horses are being bred in Tersk, which are slowly finding their way to Western Europe.
-gw- 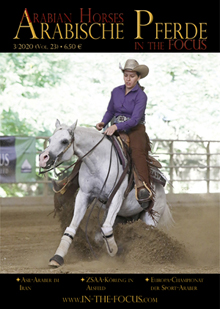 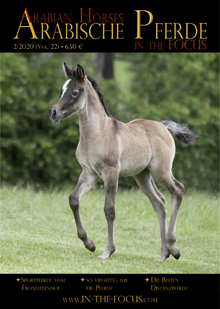